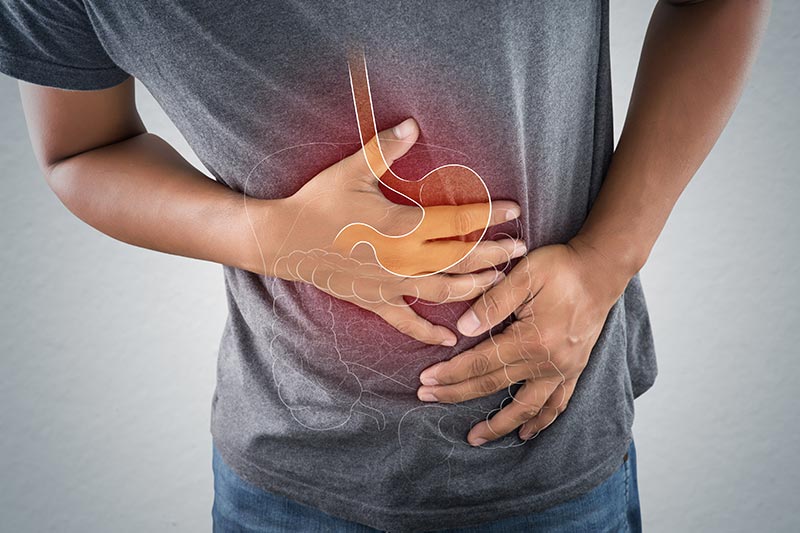 Gastric Upset : Gastritis is defined as the inflammation of the inner lining of the stomach. This may be caused due to various reasons and the condition has become rampant with today's stressful and modernized life.

Any factor that injures the wall (protective lining) of stomach provokes the symptoms of gastritis. Common causes of Gastritis include:

The medical dictum is: Gastritis is the result of Hurry, Worry, Curry.

Irritable Bowel Syndrome : IBS is one of the most common disorders of digestive system producing a spectrum of symptoms such as persistent and recurring abdominal pain associated with the passing of motion, change of bowel habit (diarrhea, constipation, or alternate diarrhea and constipation), etc. without any apparent cause. The word syndrome means a group of symptoms. IBS is a syndrome because it can cause several symptoms in addition to those mentioned, like cramping, bloating, gas, frequent urge to pass stools, the sensation of incomplete evacuation etc.

IBS is the disorder of function, which means that the bowel doesn't work, as it should. If one visualizes the bowel, it appears perfectly normal without any inflammation or other structural changes. In people with IBS, the intestines squeeze too hard or not hard enough and cause food to move too quickly or too slowly through the intestines.

Through the years, IBS has been called by many names--colitis, mucous colitis, spastic colon, spastic bowel, and functional bowel disease, irritable colon, and nervous colon. Most of these terms are inaccurate and refers to an understanding of diseases at that particular time frame. Colitis, for instance, means inflammation of the large intestine (colon). IBS, however, does not cause inflammation of the bowel and should not be confused with another disorder like ulcerative colitis.

Liver Problem : The liver is the largest gland in the human body. 'Cirrhosis' of liver is a condition wherein the normal liver tissues get damaged and replaced by scar tissue.

Healthy liver cells get substituted with fibrotic scar tissue in a very slow and gradual process. Conditions leading to recurrent inflammation of the liver cells (hepatitis) heal with fibrosis and scar tissue formation.

How does cirrhosis affect the liver?

Cirrhosis can disrupt many vital functions of the liver. Any condition that can damage the liver cells can cause cirrhosis. The liver gets its major supply of blood from the venous system of the intestines. The presence of scar tissues can reduce the effective circulation of blood within the liver. This slows down the transport and elimination of the various products of liver metabolism. The liver breaks down many substances including red blood cells and drugs and toxins. With chronic inflammation & scar tissue formation, the liver function becomes very sluggish leading to accumulation of various harmful substances.